Forty Six days on the road, Fourteen rest days, and thirty-two days of cycling from coast to coast, Vancouver to Halifax. This is what it took me to cycle across this great country of ours. There was a lot of food and liquids consumed, a lot of calories burned and a lot of sweat shed propelling myself across the vastness and endless Kilometers of Canada. There were many mountains climbed in the Western Rockies many rolling hills in the Prairie's and many unexpected and challenging hills in Northern Ontario with little or no cycling shoulders all in record or near record heat. However, when I reached the beautiful province of Quebec I was in cycling paradise. Quebec had wonderful cycling infrastructure from fabulous bike paths to excellent bike lanes on its roads. What a Joy it was to cycle along these roads known as the "Green Route", along the banks of the scenic Saint Laurence. No hills or mountains here, just gentle rolling countryside with picturesque towns and villages that dotted with rich farm land, running down to the majestic Saint Laurence River. It was then on to Grand Falls New Brunswick,with cooler temperatures and it's wide and smooth cycling shoulders.This was another great province to cycle through with lots of friendly people. From New Brunswick it was then on to Amherst, Nova Scotia. with its rolling hills and pastoral farmland and great people. The end was almost in sight. I could almost smell victory. One more day to Halifax and relief mixed with celebration. I arrived in Halifax around 6:00pm on August 12, the same day as the closing ceremonies of the London Olympics. No podiums this weary cyclist though. I just got my feet and bike tires wet wet in the Atlantic at Halifax forty six days after I went through a similar ritual in beautiful Stanley Park in Vancouver, British Columbia. The Odyssey was over it was time to think about getting back to reality which I was happy to return to.

Not too much left to say except to thank my wife Mary who supported me between Vancouver and Calgary and later on at the other end between Quebec City and Halifax. Also thanks to my daughters Victoria, Sarah and Grace for their unwavering, moral support.
A special thanks to Beansie and Greg Clark for making me feel at home on my first rest day in Penticton, British Columbia. Thanks also to my cousin Gary who fed and nourished me in Winnipeg, Manitoba while I was mustering up courage to face Northern Ontario. A huge thanks also to Beth and Kerry Keogan in Ottawa who made this road weary traveller feel so much at home with their tremendous hospitality. Thanks Kerry for the photographs, the blog and the wonderful tour of Parliament Hill, and Beth for the wonderful food. You Guys are amazing!! And last but not least a huge thanks to Sheila Laursen in Point Claire Quebec who took care of me in in my hour of need and nourished me back to health after a day of cycling into head wind with the humid ex at 45 Celsius. Thanks Sheila for your wonderful hospitality and the enlightening tour of your beautiful city of Montreal. A huge thanks to Cathy from Sturgeon Falls, Ontario who drove me all the way to Sudbury and back to my bicycle after we found my lost bike pannier, a distance of 126 Kilometers. Cathy I will pass it on. People like you are amazing!
It was great cycling with you David between Wawa and Espanola Ontario. Also To my friend Pierre from Laval, it was great cycling with you, for three days, from just past Montreal to Montmagny Quebec. We will cycle again Pierre in the west, and this time we will take our French, English dictionaries along for the ride.
These are just some of the great people that I was fortunate to meet in on my cycle trip from the West Coast to the East Coast of our great country Canada.


Sean Collins
Posted by Child Haven International at 7:57 AM 1 comment:


Posted by Child Haven International at 2:35 PM No comments:

Sunday August 12th. The eagle has landed..... I left Sackville at 6.30 this morning. The weather was grey and overcast with a Light fog. I was excited a about my last day in the saddle but not the 214 kms ahead of me. However, I persevered and as the hours passed the kms got shorter. I narrowly avoided several showers but never really got wet. My wife Mary met me at several locations along the way and provided me with nourishment as well as moral support. I finally crossed the McDonald bridge into Halifax at 5.30 PM. I dipped my foot and the bike into Halifax harbour and felt relieved to have this gargantuan journey behind me. It's also nice that I can give this a big X off my bucket list. 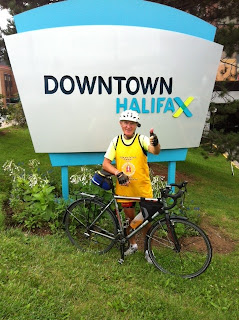 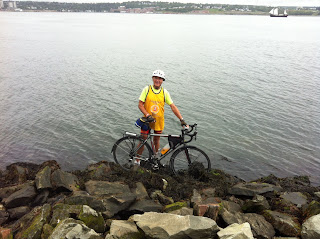 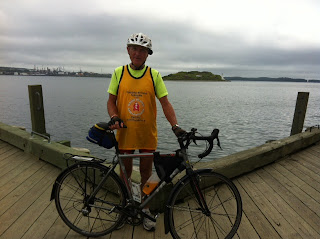 I would like to thank all the people for their moral support and also their financial support for Child Haven.

I would especially like to thank my family and my Long Suffering Wife for their patience and support during this arduous journey and futile attempt at self-destruction...... 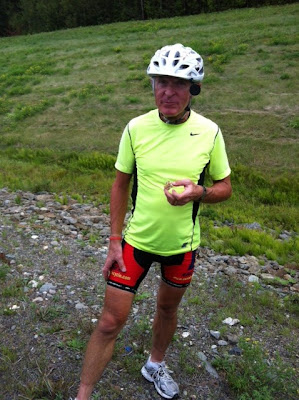 Saturday August 11th. Just about there..... 1 more day in the saddle... Cycled to Sackville 201 kms with a little bit of headwind. It was raining lightly in the morning when I left and it cleared after about an hour but the skies were heavy and overcast for most of the day. However, except for a few light mists, I luckily escaped rain for the rest of the day. The roads and shoulders in New Brunswick have been excellent. Almost in Nova Scotia. I am determined to reach Halifax tomorrow by hook or by crook to end this 6 week odyssey on the saddle.
Posted by Child Haven International at 7:34 PM 1 comment: 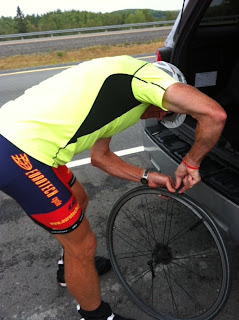 Friday August 10th. I started off the day with my second flat tire of the whole trip just 5 kms out the road and it was just starting to rain. This set me back 2 hours. However, despite the rain which cleared up after a few hours I made it to Fredericton which is 210 kms by 5.30 in the evening.

I will be crossing into Nova Scotia tomorrow, hoping to reach Sackville and then Halifax late Sunday evening to dip my bicycle and feet into the Atlantic Ocean.
Posted by Child Haven International at 11:02 AM No comments:

Thursday August 9th. Rivieres-Du-Loup to Grand Falls New Brunswick today. 191 kms. It was another good day for cycling with a nice tailwind. However there were lots of hills also and the promise of more tomorrow as I head for Fredericton. Beautiful pastoral countryside with gently rolling hills. Great roads in NB with wide smooth cycling shoulders. These past 2 days the cycling has been made easy for me with the assistance from my wife Mary to carry my panniers and take care of my nutrition needs and also for her moral support in assisting the completion of this cross Canada bicycle odyssey.
Posted by Child Haven International at 10:04 PM 2 comments:

Wednesday August 8th. Left Quebec city today heading for Rivieres du Loup. Caught the ferry across the St Lawrence to the South Shore. There was a beautiful view of the Chateau Frontenac from the ferry. By the time we got across it was late morning and Rivière du Loup was 190 kms away. Some beautiful cycle paths out of the city that got us onto route 132 East. It was a great day riding as we had a tail wind to our backs. We stopped at Montmagny for lunch and this is where I said goodbye to my friend Peter from Laval whom I have been riding with for the past few days. It was a beautiful countryside to ride through along the South shore of the St Lawrence. Finally arrived at 7 pm after another long day on the road.
Posted by Child Haven International at 10:27 PM No comments: 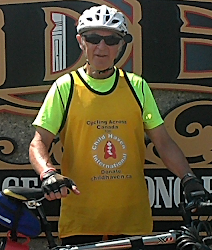 Child Haven International
Maxville, Ontario, Canada
Child Haven has five homes in India, one in Nepal, one in Tibet in China and one in Bangladesh. Our homes accept children who are disabled, parentless, or from socially disadvantaged situations - and who are destitute, i.e. do not receive even one good meal a day. Girls and boys are treated equally, and without regard to race, caste, colour, religion or culture. Living is simple and meals are vegetarian. We try not to Westernize the children, but rather attempt to raise them according to the highest ideals of their own cultures. We respect the heritage of each child, whether Hindu, Muslim, Jain, Sikh, Christian, Buddhist, secular or other.